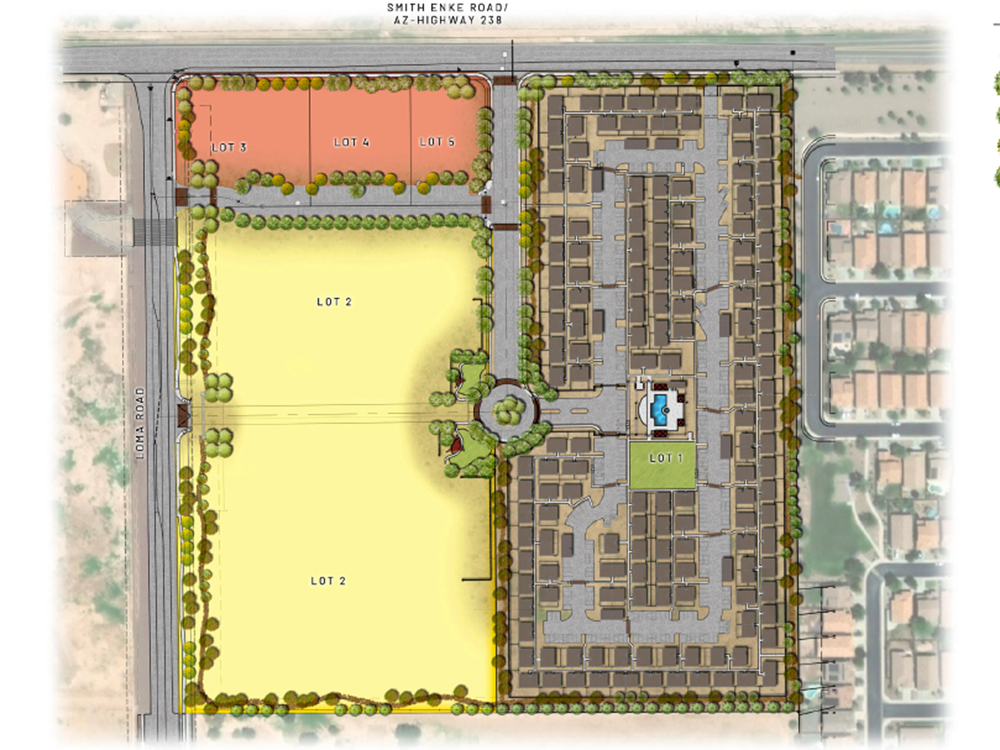 The Planning and Zoning Commission on Monday approved a zoning change for the proposed village of West Maricopa.

Council changed the zoning of the proposed 35-acre development on the southeast corner of Smith Enke (SR 238) and Loma Roads from CI-2 Industrial to Planned Area Development, paving the way for a March 2 city council vote on the project. The development would include single-family homes for rent, apartments, a gas station, and retail and / or office space. The developer is Matrix Equities Inc. of Scottsdale.

The project is bordered by Acacia Crossings to the east and vacant land on the other four sides, including the Estrella Gin development site to the south.

The West Maricopa Village site is divided into five lots. Lot 1 would house the single-family home portion of the project and would be the first phase to begin construction. It would consist of approximately 180 units on 16.35 acres, with a density of 11 units per acre. The homes will consist of two-bedroom stand-alone units and one-bedroom duplexes. The development would include a set of amenities which could include a swimming pool and a social pavilion.

The homes in Lot 1 will be built in blocks of 40 units, but the main roads, landscaping, trails and amenities would all be built with the original block. Construction could start as early as March or April of this year.

The apartment phase, on the 14.01-acre Lot 2, would be developed after the completion of Lot 1. It would consist of three-story apartment buildings and, although the number of units is yet to be determined, the zoning requires high density use.

Lot 3, of approximately 1.44 acres, represents the mixed-use portion of the community, with residential units – apartments, condominiums or townhouses – on the upper floors and commercial use on the ground floor. Lot 4 will likely include a gas station, convenience store and / or car wash. And the 2.01 acres of Lot 5 are intended for retail, commercial office, or medical use. Lots 3, 4 and 5 face Smith Enke Road at the corner of Loma.

The main street of the development is designed as a private street designed with community walking and fun in mind. This will allow residents and visitors to walk around and take advantage of retail or business opportunities in the community.

Commission Vice-President Michael Sharpe said he believed the project was exactly what this part of town needed.

“It is an ideal project for this part of the city,” he said. “The location this is located is great, it seems to be pretty well thought out, so I applaud the Applicant and his hard work with the Town of Maricopa.”

Commission President Linda Huggins echoed this sentiment, saying: “This is a great project.

Some questions were raised about traffic control in the area, but any discussion was postponed as a future assessment of conditions will need to be made once it is determined how many people will live and work in the area.